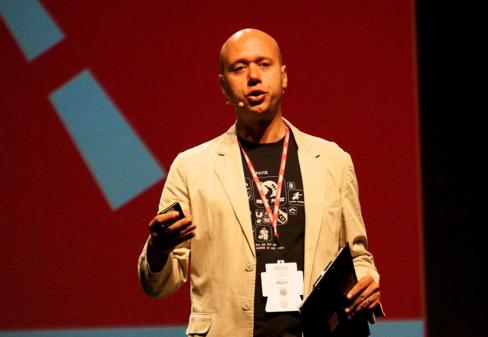 I usually don’t prepare my Frontiers commencement speeches (note: I’m founder and CEO of the conference) but – this year – a lot of people invested a lot of time/effort to transform Leeander and myself into proficient hosts on the stage: I studied what Bruno Giussani – the best host around IMHO – does at TED Global and we attended a coaching session with a professional film actor (thanks fishbone creek!), Paola followed us for the whole day, and they deserved a proper performance.

I prepared the following speech during the night between June 7th (workshops day at Frontiers) and June 8th (main conference) at Frontiers (I usually am sleepless in those days).

The most frequent question I got about Frontiers is:

Why have you created Frontiers of Interaction?

And my usual (bold) answer always has been: “Because I want to change the world; and Culture is the best tool we have to do it, we just have to find the most powerful mean to deliver it to people: and an event which stands in the middle between a conference and a show is my nuclear weapon”.

This usually answers the question. But if I got another (deeper) one such as

Ok but WHY do you want to change the World?

This was till the first day at Frontiers 2012, during Luke Williams workshop I finally understood the REAL reason I do Frontiers.

I organize it for those who have no fear to fail

I organize it for those who always have a plan, and execute it.

I organize it for those who are motivated to succeed.

They are our children.

I then invited both mine and Leeander’s daughters, 7 and 6 year old, (incredibly they share the same name: Francesca) on the stage.

To me it was the most heart touching moment of these two days. Thanks everybody for having shared it with me.

P.S. when I asked Francesca whether she enjoyed being on stage she answered: “Yes, but you kick me off to soon”